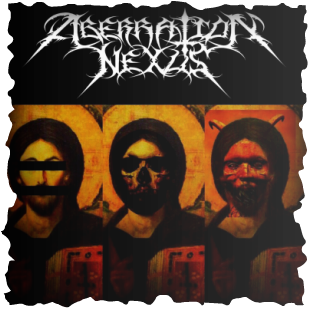 Aberration Nexus is a one man  symphonic black metal band from Australia.

Good day Chris. I'd like to start off my thanking you for taking the time to do
this interview.

1) Let us start by having you explain the meaning of the band name
"Aberration Nexus".

Chris: The name came from the concept that inspired the music that is to be the
album...the apocalypse and the end of human life on planet earth.Aberration
Nexus - the point where everything changes...and not necessarily for the best!
The moment when the bombs are launched...life will never be the same and
everything you know and hold dear is to be lost...with no divine intervention,
no saviour, no hope...

2) Just like the birth of a child, everyone remembers that day in great
detail.
Tell me about the birth of Aberration Nexus?

Chris: The project came into being almost two years ago when I began writing and
playing after a very long break...I started with a couple of riffs and put them
together with no real intention of actually doing anything with them, but I
really liked what I was writing/hearing. The more I listened to it, the more I
heard in it - so all the orchestral elements came in...one song led to another
and Aberration became a consuming force in my life...it felt like it was always
there and was just lurking, waiting to find expression. The music just flowed
and has since taken on a life of it's own.

3) Aberration Nexus is a one man Symphonic Black Metal Band.
Are there any down sides to doing this band on your own?
What about the up side of it?

Chris: Down sides...a shit load of very hard work! Writing, arranging, performing,
recording, producing and engineering, promoting and distributing...I honestly
enjoy all that but, nothing about it has been or is easy! Another down side is
that I am unable to play live - I do miss the stage, but this is something for
the future and really not on the radar yet!
Up sides are complete freedom and autonomy in my expression.
I also have a certain luxury with time, in that I can work on it at a pace that suits my life (& much to the chagrin of my supporters!)

4) I am always curious to know who inspires bands to pick up an instrument in the first place.
Who inspired you and is this band or person still a big influence in
your music?

Chris:   It seems like a lifetime ago but, James Hetfield and Cliff Burton were the first
to make me want to pick up an ax and play.
Chuck Schuldiner came along later and made a big impact on me and still is a huge influence. More recently Opeth and Cynic...although you wouldn't really pick that in my music.


5) Some bands give off a certain vibe, they leave you either happy or  sad, some even filled with rage.
What imprint do you want your music to leave on your listeners?

Chris: Shellshock! Post traumatic stress induced psychosis!!
I really want the listener to be left in a state of "what the fuck
just happened?" after listening...and after they collect their thoughts and
recompose themselves (and change their underwear!)


6) What are some things in everyday life that inspires you to make a new song?

Chris: I honestly don't know...every day life for me is pretty busy!
The songs just seem to come from nowhere whenever they feel like it.
Inspiration strikes at random...
I usually just pick up my guitar and something happens.
I don't play music by anyone else, so whenever I do pick up the guitar I'm writing.

7) Right now you are working on an EP "Libro Iacet" (meaning, book of lies)
Where did this title come from?
Does it have any significance in your music?

Chris: the "book of lies" was the original idea for the EP with chapters, prologue and
epilogue, but I felt that was too contrived...part of that idea was to have all
the song titles and lyrics in Latin - also contrived and summarily rejected!
(except for the title)
After working on the tracks for the concept (full length) album I felt too restricted and really just wanted to have a somewhat free-er and simpler version of my music - without the symphonic elements & the  conceptual "cage".
The title is part of the name of the first track on the EP and is an unabashed shot at organized religion and their texts...which I believe are a man made contrivance used to control the populace.
Not the "word" of god...there is no other significance in my music than that.

8) Your EP will be released on Perish Twice Records.
Tell us a little about this label.

Chris: Perish Twice came from my wife (who co-manages Aberration and assists with many
details - musically and artistically) and Robert Frost's poem "Fire and Ice".
Read the poem and you'll see how it resonates with Aberration.
It's not so much a label as a copyright mechanism and self-distribution point for my
releases...
I certainly don't have a roster of bands!

9) From what I hear, you also have a Full Length album coming out later this year.
Can you give us any insight on this album?

Chris: No...haha! Other than to say that it has been a Herculean effort and has taken
almost two years to write!
I have almost completed writing for it and can soon commence the recording thereof...it's a pretty wild ride from start to finish and I've touched on what the concept for it entails elsewhere in this interview.
If you've heard the instrumental demos that are out then you pretty much know what to expect...except the songs are all going to be re-recorded.
Hopefully it fulfills my vision of dragging the listener through the apocalypse
and leaving them on the other side!

10) As a one man band, I am assuming that Aberration Nexus will not be touring any time soon. haha
Is playing live something that you would like to do one day?
Lots of session musicians out there. :)

Chris: Yeah, I've had a few discussions with my friends regarding this and I have no
doubt that they would be willing participants should I take this project to
full band...however, it's really not something that I can commit to at this
time, as much as I'd love to!
I would also like to make a couple of albums first and just see what the future brings.
One thing I have learned (in life and with Aberration) is that there is no forcing things...it all happens in it's own time and of it's own accord.


11) Where do you see yourself with your band in say 10 years?
Do you want to remain "underground" or would you like to move up in the world..?

Chris: I don't have any delusions of grandeur nor any desire for world domination (as
nice as that would be!)
I'm just going to keep making music.
I have no idea where that will take me and that's the way I like it!

12) Well, that is about it for now I think.
Is there anything you would like to add before we say good-bye?

Chris: Thanks to you for your support and for this interview! And a massive thanks to
my friends and supporters around the world for your patience - which will soon
be rewarded!
Hails!

Check him out on http://www.reverbnation.com/aberrationnexus as well!

Make sure to check this band out and keep your eyes open for his new EP "Libro Iacet" coming soon!!!