Back in 2008 I was able to interview one of my all time favorite bands Abigor.
This was never meant for a zine but simply my old myspace page.
This is how it went. 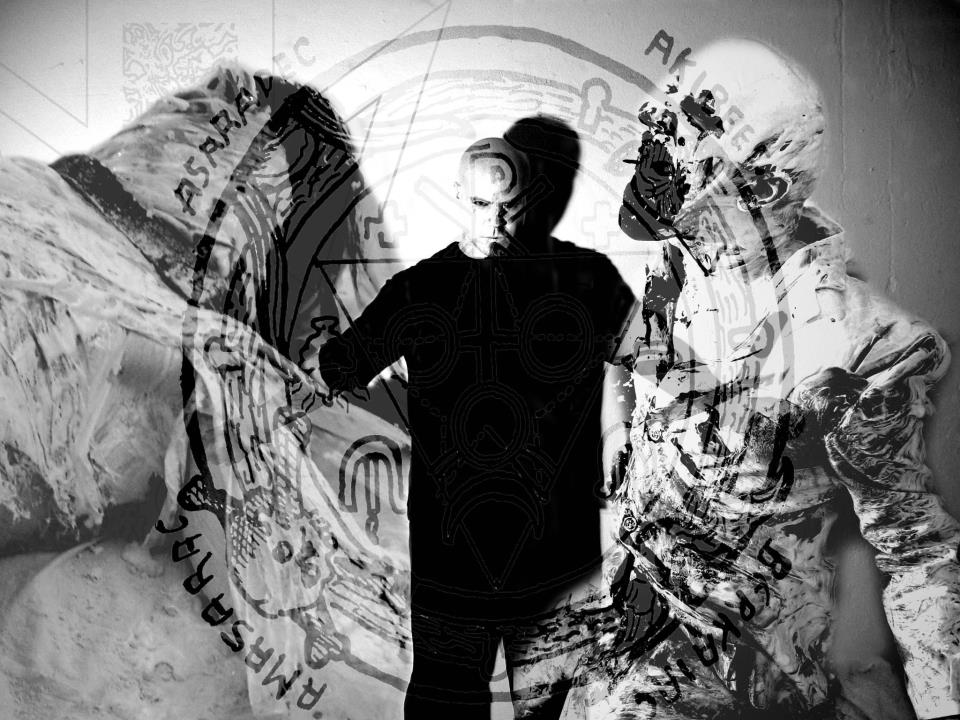 V: HOW IS LIFE OVER THERE AND HAVE THEY ACCEPTED YOUR MUSIC IN THE SCENE THERE VERY
WELL?

Abigor: We were one of the first bands back in 1993 that proclaimed their music as
Black-Metal, so there haven't been any other choice for others, and even they
wouldn't have accepted it, who cares?! I mean ABIGOR is our band, we've defined
goals, defined mental attitudes behind it, so love us or hate us, that won't
change our ways.

V: AS YOUR LYRICS AND MUSIC ALLOW THE FANS TO HEAR IS THERE IS A FINE MIX BETWEEN
SATANISM AND PAGANISM.
ARE THE TWO SIMILAR ENOUGH FOR YOU TO COMBINE THE TWO TASTEFULLY?

Abigor: Not at all! ABIGOR is a satanic band, Orkblut might have been influenced by
paganism, also a song of Nachthymnen – but that was noted. Personally I think
one can't combine paganism and Satanism, both have interesting aspects for my
personal live and believe, but there's no way to find similarities we could use
for ABIGOR.

V: SEEMS LIKE BANDS COME AND GO BUT ONLY THE FEW,THE STRONG STICK AROUND FOR MORE
THEN A COUPLE YEARS.
ABIGOR STARTED BACK IN 1993.
HOW HAVE THINGS IN THE WORLD (MUSICALY) CHANGED OVER THE YEARS?

Abigor: 180° in my opinion. Tons of fucking bands, so may genres, so many stupid
definitions, so what will be the next – Christian-Black-Metal?! Fuck that. The
break from 2003-2006 were we weren't really into the music scene was good and
necessary for us because it just showed that all watered down and 90% of the
bands aren't worth a shit and beside that it really strengthen us as band and
our personal values that forms ABIGOR.

V: I AM SURE WITH THE MUSIC YOU PLAY THERE WERE MANY OBSTICALS TO CLIMB TO GET TO
WHERE YOU STAND TODAY IN THE BM SCENE. HOW HARD WAS IT TO MAKE IT TO THE POINT
OF GOING STRONG STILL IN 2008?

Abigor: We're all quite skilled musicians, so it was never a real problem for us to
realize our ideas in the best possible way, we're concrete ideas and a view how
the "final product" should sound and look like, at least that makes us unique,
the unity behind it all. We don't need to copy, to listen what is "in" at the
moment, that's the difference…

V: IN 2003 YOU GUYS DECIDED TO CALL IT QUITS.
I AM SURE MANY FANS WERE LET DOWN AND DISAPPOINTED.
THEN YOU BROUGHT LIFE BACK TO ABIGOR IN 2006.
WHAT WAS THE REASONING BEHIND PUTTING AN END IN 2003 AND STARTING IT UP AGAIN
IN 2006?

Abigor: I was pissed by so many reasons. At that point I had problems with the
line-up, the label, the studio, the entire scene was just fucked up, so it was
the best for ABIGOR to end it at this point.
The re-start in 2006 was more or less natural because I wrote some material,
recorded a few demos, at least I met TT in late 2005 again, after 6 years of
no-contact, and we still had the same views, the same ideas, so it was the one
and only step – to re-start ABIGOR.

V: SO HOW MANY VOCALIST HAS IT BEEN NOW?
3,4,5?
RIGHT IN THE MIDDLE OF RECORDING THE QUINTESSENCE OF SATAN YOUR VOCALIST
DECIDED THAT HE DIDNT WANT TO DO IT ANYMORE AND QUIT THE BAND. WELL YOU HAD
ANOTHER GUY STEP UP TO THE PLATE AND FINISH THE CD.
WAS IT HARD TO DO THIS AND DO YOU THINK YOU PULLED OFF TWO DIFFERENT
VOCAILISTS FOR ONE CD.??

Abigor: Tharen was the first in 1993, he did the vocals on the demos, Silenius was
the singer from 1994-1999, Thurisaz from 1999-2000. And now AR, so only 4 within
15 years…
Well, it was not hard at all. TT and I do the music, write the lyrics, so we
need a voice "not more" and so far we had really dedicated vocalists, even I
guess AR will write the lyrics in the future, maybe he'll the bass too, that'll
make working a bit easier…

V: YOU HAVE A SPLIT CD WITH BLACKLODGE OUT SOON NOW RIGHT?
SO WHAT DOES THE FUTURE HOLD FOR ABIGOR AFTER THAT?
ANY NEW FULL LENGTH CDS IN THE WORKS?

Abigor: We'll see, of course we think about a new album a real straight and very dark
album, that might be the next step after the Split-Album.

V: AS THE BAND STANDS NOW, COMPLETE WITH MUSIC AND LINE-UP ARE YOU HAPPY WITH HOW
THINGS ARE GOING NOW FOR YOU GUYS?

Abigor: It's ok, even things are moving slowly at the moment. Even we've our own studio,
the main problem is the distance between us and the shit behind the band – job,
and the shit…

V: SEEMS ALOT OF BANDS ARE INFLUENCED BY JRR TOLKIEN'S LOTR.
HOW MUCH REASERCH DID YOU ALL DO ON HIS STORYS BEFORE STARTING YOUR LYRICS OR
IS IT MORE THE MUSIC THAT YOU ARE INSPIRED WITH?

Abigor: Oh well, personally I hate Tolkien, his books, his style of writing, that's not
mine at all. Personally I am not into that fantasy crap at all. Of course, I
read Lord Of The Rings as I was 14-15 years old but I never thought that this
will influence so my bands and persons the years to come. TTT, Tharen, Silenius
were fascinated by that shit that and even we used a few elements for the music
of ABIGOR I would never see it as conscious influence.

V: EVERYONE HAS SOMEONE THEY LOOK UP TO AS A CHILD.
WHO WAS YOUR HERO OR MENTOR AND WHO PUSHED YOU OR GAVE YOU THE POSITIVE LOOK
INTO THE LIVE OF BEING A MUSICAN?

Abigor: I really can't remember, but none of us is a musician, we all have our jobs, let's
say our "normal lives" beside ABIGOR, we only love music because we feel the
need to create and express our views/thoughts/beliefs with and through it…

V: WELL I WANT TO END WITH A GREAT COMPLIMENT.
I LOVE THE BAND SUMMONING. I FEEL THE MUSIC, I SEE THE MUSIC IN MY HEAD THE
STORY THE LYRICS ARE AMAZING.
YOU GUYS ARE RIGHT THERE WITH SUMMONING.
VERY FEW BANDS HAVE THAT FEEL, MAKE YOU ACTUALLY HAVE TO STOP AND THINK BUT
YOU GUYS PULLED IT OFF AND IN A GREAT WAY. I LOOK FORWARD TO MORE GREAT MUSIC
FROM THE GREAT ABIGOR!
ANYTHING LEFT TO SAY BEFORE WE GO??

Abigor: ABIGOR is the shadow, SUMMONING is the light, there's no real link between us.
Personally I don't see SUMMONING as Black-Metal; Fantasy-Metal, yes, not more, a
soundscape of Tolkien's world, boring and to slow for me… Don't get me wrong,
we're still friends, but we don't like each others music, hehe.

These days Abigor says (Taken from Facebook)
"SUPREME
AND IMMORTAL IS THE ART OF THE DEVIL!

We are proud to announce an
upcoming special release to mark ABIGOR’s 20th year of releasing Satanic Black
Metal Art.
On this occasion, for the first time since 1998, Silenius
contributes the v...ocals.
Avantgarde Music will release a handnumbered edition of 500 gatefold cover 7"s.

200 of these include an additional CD comprising of the first ever
rehearsal with Silenius.
This release wasn’t artificially unearthed  to
‘celebrate an anniversary’, like others do these days, but the original material
has demanded the form and urged to be released in the past few years. Now all
things conspire to end a cycle and let a new one begin, but more to be revealed
soon.

Back in 1997 ABIGOR recorded ´Supreme Immortal Art´. Ever changing
shape, as each release requires a different aesthetic form, the album was
planned to turn out as ‘majestic´ as possible, contrasting the eerie ‘Opus IV´
and the thoroughly traditional ‘Apokalypse´.
But sadly the powerful basic
material was buried under a thick layer of synthetic orchestration and a
devastating mix and master, while Silenius´ invocations were loaded with
redundant effects.
Now this 7" presents the work as it was intended
originally, and is based on the 1997 guitar and drum recordings. Silenius layed
down new vocals that exceed the performance of old by far, musical arrangements
and lyrics were reworked and sharpened. SOIL OF SOULS on side A, SUPREME AND
IMMORTAL (IS THE ART OF THE DEVIL) on side B summarize ABIGOR’s traditional 90s
recordings and the uncompromising standard of their present work.
For the
ones that worship the demon of war since 1993, and the ones who need to be
taught a lesson in Black Metal history, the first 200 copies hold a CD with
Silenius´ first ever rehearsal for the debut album ‘Verwüstung/Invoke The Dark
Age´. 5 songs of raw 4tracker recordings, the ugly and primitive side of Black
Metal, resonating from a time long gone, before bad digital computer recodings
were the norm to be called ‘traditional´ or ‘cult´, but are just lame copies
that do not understand why or how early Black Metal was created back in the
days.

A circle has closed, and ABIGOR are currently preparing a
statement that will cover their past 20 years and go back even longer in time,
their present and the state of the scene including magazines, the internet and
disgusting trends, something which will agitate and upset.

Watch this
space and www.abigor.at