Asbel is a DBM band from Colombia.
I sat down and with Asbel to find out more about the band
and what goes into the music.
Read along with me and learn more. 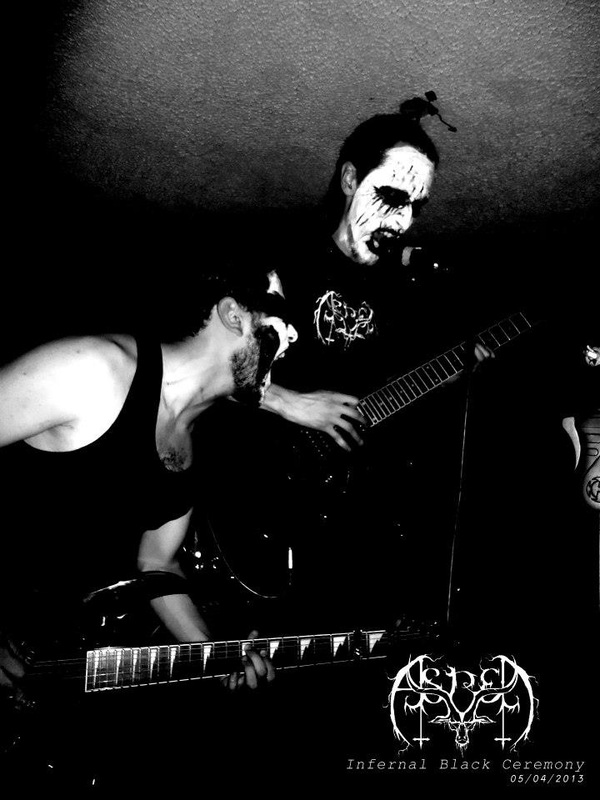 LS: Lets get started right away...Asbel is a Depressive Black Metal Band from
Colombia.
You (Asbel) are the only official member of the band. How did you come up with the
idea to start this band and where did the name Asbel come from?

Asbel:
Yes, the concept nowadays is based on Depressive thoughts, emotions, situations
etc. The idea came basically on just a one-man Black metal band, I had played in
black metal bands before, so the genre has always been and will be along the
black metal scene. Asbel  originally “Asbeel” was taken from a book on demonology,
the name represents a fallen angel which was lost in lunacy. The name was
modified to Asbel so the logo could fit a graphical bilateral symmetry harmony.


LS: Asbel  was created in 2004...in those 9 years you have released two EPs, Three Splits,
One single and Three Full Lengths.
Your last Full Length " For the Incurable Insane" in 2012.
How if at all does this album differ from your later albums like for instance your first
Full Length " Elegist "Hymns for Lost Souls" released in 2007...?


LS: You are a solo project with session members. Do these session members contribute to
the making of any of your albums or are they only for live shows?


LS: If they are only for live shows, why not make them full time members?

Asbel:
Reasons I went on solo: bad experiences with past bands where members were not
compromised, they did not go to rehearsals, bad presentations on gigs. So
dealing with band members is complicated, so I decided, “hey, I can do this on
my own” and there it is. By the way for Asbel, I have had compromised musicians,
professional people who give a 100%, many have played in Asbel and all I
appreciate. They have given the best on gigs, besides I give them liberty to
make opinions, propose any thing they feel for live performances, in rehearsals,
so there is always a good mood, and I am never  bossy or something like that.


LS: Your latest release was self-released. Are you now looking for a label and if so,
what are you looking for in a label...(You never know when someone from a label
might read this)

Asbel:
Yes, self released, most of the albums are released that way, however some
underground labels have released it overseas with some limited releases.
I look for, support and promotion, not just for the label to “say” they released it,
but also to promote the release. It does not help neither side to just put on a
webpage the release, it is necessary to comercialised, make publicity, support
the release. I do not have problems with the release format, CD, CD-R, Vinyl,
Tape etc. I have always thought, “what's inside is what matters” so that’s no
inconveinence with me.


LS: Your 2007 release " Hyms for lost souls" will be re-released on
tape via  Blasphemous Attack Productions in Aug. on tape.
Was there a high demand for this album?

Asbel:
Yes, actually many people have asked me for this release, but it was limited to
about 30 copies, so it was neccesary for a re-release. It has been one of Asbe'ls
best releases. (personal opinion)

LS: You took part on the  No Remorse Records Compilation. Did you create a brand
new song for this release or did you use an old song? (What is the song you used
title and if you chose a song WHY did you pick that specific song for this
compilation?)

Asbel: The song is “To Earth our Flesh, To Hell our Soul, planned to be a track for the
Elegist 2007, but was not included, then released on the split “Nonexistential”
with Brazilians Cantus Soturnus. The song had a great reception throughout the
public, recording and live; it has a great variety of rythms throughout the
song, so it was necesarry to keep on promoting it cause the split was limited
for like 10 hand-out copies. it is a good song.

LS: You are dubbed as Depressive Black Metal.
Is it the typical....I hate life, I am always depressed and wanting to kill myself theme
surrounding the music...where do your lyrics come from? What in your life
inspires you to write?

Asbel:
Actually no, the lyrics touch depressive states of the mind, inner struggles, not
just the typical slitting wrists, wanting to die thing. The depressive theme
started with the EP Grim, Cold and Alone, which has very personal lyrics
surrounding hard moments in life. After this,  for example For the
Incurable Insane, inspired by the documental holding the same
name;  lyrics contain many clinical themes, where stories are described
concerning real issues where people who were pointed as “insane” suffered all
kinds of experiments  which only helped them to be more ill; things like
these inspire my work.

LS: Corpse paint is a popular Black Metal thing....I think people wear it for different
reasons.. What does your design and style mean to you and how does it support
what Asbel is about?

Asbel:
Although lyrics on Asbel intend to touch depressive matters, for me black metal
is war, for war we need weapons, we need to intimidate the enemy (religion,
dogmas, christinaity, political matters, life, etc), so corpse paint suites well
when we are at battle.


LS: Like we spoke about earlier in the interview, we spoke of live shows.
Not many DBM bands perform live...what is the atmosphere and vibe that you think the
crowd gets when they hear you play?

Asbel: I have always said that DSBM does not have to be down-tempo like many DSBM bands,
Asbel songs are well highly paced, fast songs, so it does not differ from the
natural sound of black metal, so live shows are characterized by being
surrounded by intense energy, head bang, insane moods, that’s what Asbel offers
at live gigs. Personally if I attend a concert where a down Tempo DSBM band is
playing, I would think of it being dull, by the way I like down tempo bands
also.

LS: I was listening to one of many songs off your many different albums.
"Demons Wrath" was one of them....If there is any sadness in your life I can't hear it
in your music. Maybe it is the music itself more then the vocals...
Tell me a bit about this song....What is it about?

Asbel:
legions, is an album where a different concept was touched, yes indeed you wont
find sadness in this album, just rage against dogma, religion etc. I always
intend to have different concepts on each album; talk about different things;
Talking about the same thing album over album, is stupid, universe is wide
enough, no limitations must be handled in any circumstance.


LS: Will Asbel ever be produced or will you always keep your fuzzy and dirty sound? What
is in store for the future of your music?

Asbel:
Well, I will never say never, as long as I keep the sound and composition which
characterizes Asbel, I will have no problem.
Recording, I will keep making music till the day I die. As I have stated before, I will
immortalize my music, and the only way is recording. Live shows? Come and go, it
is not my main goal.


LS: Tell me about some immediate plans. Where are you these days? Are you always working
on something new? Any new release plans for the near future?

Asbel: Yes indeed, I am recording the full length 2013 “The Noebo Effect”, also a split
will with Brother-band NeverBaptized, The Album “The Dark The Withered Volume 2”
with more female participants from around the globe, is ready, just waiting for
label contact. So I am surely busy with music right now, and yes!, always
working on something new.

LS: What about shows? Anything coming up that we should look out for?

Asbel: Not yet, anything new will be reported on the facebook official page.


LS: I guess we have covered all the basics here....is there any final words you would
like to add?

Asbel: Once again thanks for your support.

You can listen to a song here.
http://youtu.be/yjpFmfykZwI