Seems
there are a lot of Black & Roll bands out there these days and Manheim from
Croatia is one of them.....
I had the chance to talk with them about this new band. Here is what I found out.... 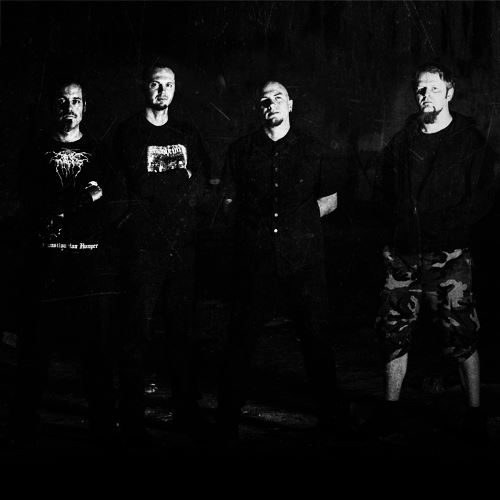 LS: Good day and thank you for taking the time to tell myself and all the readers a
little about Manheim.

Manheim: Thank you for taking an interest in our music. It's always a pleasure.

LS: OK, so Manheim came about in 2007... Who was the creator and what brought on the
idea of a black & roll band? Just a lot of different musical tastes?


Manheim: Well, the idea didn't just come out of nothing.
The three of us had been playing for a few years before we split up in
2005. It wasn't anything serious, we never recorded anything had no real gigs.
We were basically kids and had no idea what we wanted to do. In early 2007,
during a night of rembunctious drinking we decided we should rejoin and start
playing seriously.
We played black metal before, but we wanted to do something a little bit
different. Still Black Metal but with a twist. After a lot of searching and
lots of thrown away songs, our style finally chrystallised.

LS: In March of 2008 you guys released your first demo.
How did that play out for you? Did it draw many listeners at that time?


Manheim: Not really. It was just something we recorded for the
hell of it. An acquaintance of ours had the equipment and the time to record, so
we did it.
We only reached a small circle of listeners, who mostly liked what they heard, and
that gave us drive for further work.

LS: Manheim won the O'rock fest competition...what kind of bands were you guys up against
and did this help in your new career at all?

Manheim: When we applied for the festival, we didn't even make
the cut. But then the second day the organizer called us and said one of the
bands canceled and asked if we could fill in. We said “okay”.
There were lots of different bands there and we were the only one that played
metal. I guess our live performance left the judges with no choice but to present us
with the prize.
It didn't help us much, but it looked nice in our CV, and it reassured people that
we are not just another demo band, and that, if nothing else, we are worthy of
paying a ticket for our show.

LS: In 2010 Manheim released an EP "Kreatura" this album was self released...
At this point and time, are you guys signed to any label and if so...which one?

Manheim:  At the time “Kreatura” was released we weren't even
considering singing to a label. We just put it on the internet for everybody to
hear. We got a good response, and it pushed us forward, got us few gigs and
made us more determined.
At the moment we are not signed to any label yet, but we do have some offers we
are considering. We don't want to disclose anything until we have signed the
contract.

LS: The competition I mentioned earlier on...was this your first time playing live as a
band or had you played before that? What can the fans expect when coming to see
Manheim live?

Manheim: We had played quite a few shows before that. The most
mentionable was a concert with Slovenia's renowned band Noctiferia. We always
make a good impression on the audience with our uncompromising, energetic shows.
Nothing more, nothing less, just pure raw black metal show.

LS: Currently you guys are working on a new album "Nihil". Will this be full length?
I heard a song on your Facebook page off this upcoming album. I enjoyed it quite
a bit... Can you tell a little bit about the making of this album?
What label will release it?

Manheim: Thank you.
Yes, it is a full length album. It was recorded during the autumn and winter
2012/2013. It contains nine songs, made in 2011 and 2012, with the exception of
“Prigrli besmisao” and “Kreatura” which were released on our previous demos, and
which we like too much not to enlist them on this album (re-recorded, of
course). It features our friend and manager Filip Vuckovic as vocal on “Kreatura” and cover
of Mayhem's “Deathcrush”.
It was recorded by our long-time friend Dražen Završki, and mixed and mastered by
Patrick Damiani of TidalWave Studios. The album is due to come out this summer,
and as I mentioned before we can't disclose under which label yet.

LS: Seems the genre of Black & Roll is a mixture of black metal and oldies rock &
roll music.....so what bands influenced you as a kid and do those bands today
still play a part in your music?

Manheim: Bands that influenced us the most are bands like Darkthorne, Vreid, Khold, Satyricon,
Mayhem, etc. But there are also other bands which have influenced us
individually, often subconsciously. Each one of us has their own taste in music,
which, of course, is not limited to metal genre, and, whether we want to or not,
each one of us incorporates a little bit of that taste in our
music.
Although we call ourselves a Black & Roll band, lately our sound has drifted more
towards pure Black Metal. Our sound has become much heavier, as you had the
chance to hear in our new song “Hitting the Wall”. We also added keyboards on
three songs on upcoming album, which again took our sound in a new direction. It
is hard for us to label our music. That is up to our fans.

LS: Their are 3 members in the band. Guitar, drums and the vocalist plays the
bass....what do you do and at what age did you know that this would be your
instrument of choice?

Manheim: Actually, there are now four of us. Just recently we added a second guitarist – Tumor.
He was also involved in making of “Nihil”, playing guitar and keyboards. He is just great musician and a great
friend, and he has really enriched our sound, gave it a little more “juice”.
Each of us had played their instrument before. I myself (Mamut) started playing bass
with a friend when I was 12. By the time we formed Manheim each of us played
their instrument before, with other bands and projects.

LS: I could only imagine how much fun seeing Manheim live would be...any upcoming
plans of playing live again and maybe one day you will make it to the states?


Manheim: We only have two upcoming shows worthy of mention:
“Underwall Festival” in Zadar, Croatia and “Carpathian Alliance” in Ukraine,
where we will play with Shining and Immortal. Right now we are focused on
releasing the album. After that we should have more shows booked.
Making it across the Atlantic is not an easy task. It costs a lot of money to fly a
band from Europe. If someone is willing to pay, of course we would play. But,
for now we don't have such plans. First we conquer Europe, then America!

LS: Tell me a bit about the theme of your lyrics? Where do they come from?

Manheim: I (Mamut) am the soul writer of lyrics in the band. My
lyrics are a result of my personal feelings. I use writing as a valve to let go
of all frustrations accumulated in me. As a result, my lyrics tend to be grim
and heavy and sometimes sarcastic. They are an insight to my way of thinking and
my feelings. They are my reflections on life and everything that surrounds
us.

LS: So, there is a video for Manheim being made?
Will this go with a song or just an over view of the band in general??


Manheim: For now we plan it to be just an overview of the band.
But, who knows, maybe we'll put it out as a video for a certain song. We'll just
have to wait and see. We like too keep our options open.

LS: I have to be honest...I just heard your music the other day and really know
nothing about you guys..... this interview has been very challenging for me.
I hope I touched on all of the bases....is there anything that you would like to
add before we go?


Manheim:  Thank you very much for the interview.
I don't think there's anything more to add, but that we'll keep on rocking.
Playing and making music. It's what we do, it's what we'll keep on doing no matter what
(except in case of some unforeseen events out of our power, which is something we hope won't happen any time
soon). So, hopefully, you'll be seeing and hearing more of us around.

Check out a song off their up and coming new release
http://youtu.be/H9_SoTGlu6E