Moonreich is a Black Metal band from France.
There music hit me hard the first time I heard them.
Haven't heard such a solid band in a long time.
I got to sit down with Weddir to learn all there is to know about Moonreich. 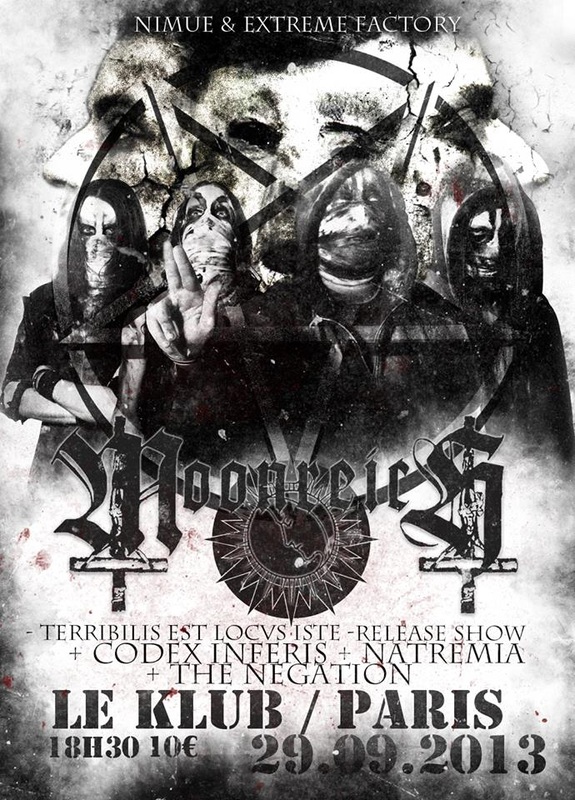 LS: Hello and thank you for your interest in this interview. Hope all is well.

Weddir: Hi, Thanks for your time, doing well, We are currently doing some promotion for
the new album, we are really confidents with it,

LS: Moonreich is a Black Metal Band from France. How did the band come to be?

Weddir: In fact, Moonreich wasn't a band in the beginning, it  was a solo project
of mine. I had that burning flame raging in me, that was a really primitive
project back in 2008-2009. It really was some angry punk/black metal. Then I
felt that the best way to transcend and to deliver that
primitive rage would be playing live. That's why I started to find members with
the same strong dedication that I do have. Then after the solo EP « Zoon
Politikon » in 2009, we recorded our very first full length in 2010, it is
called « Loi Martiale »,  which means «Martial Law» in French. After
that we made a couple of gigs and festivals and recorded in the late 2011 a
second ep «Curse Them» that was released in April 2012. We made a French tour to
promote it and now, here we are with our second album « Terribilis Est Locus
Iste».

LS: First things first, please clear something up for me.
In 2012 your drummer left the band (or however it
happened) yet you have recently released a new full length album this past
April. "Terribilis Est Locus Iste"
Was this album made and recorded prior to the drummer leaving?

Weddir: Since one year, we have a session drummer, we really sound more violent and
louder than never before with him. He was there before Terribilis was finished
to compose.

LS: Is the band in the process of looking for a new drummer these days seeing as how
it is just a vocalist/ guitarist, guitarist and bass player currently in the
band? (Or do I have my information wrong)

Weddir: Well, we are 3 stable members as you said. But we have our session drummer, he
will make some other gigs with us so we keep going with him for the moment.

LS: ATMF released your latest album. How are things going so far with this label and
will you be using them in the future as well?

Weddir: So far, so good, we really have some good ratings but we are not very focused on
it you know. The most important thing is that we have to be 100% satisfied with
the final result of the album. Whatever if people like it or not, it's not that
much important to us. ATMF really have a big distribution network, that's what
matter to us, we really want our music and also our message to be delivered in
the largest part of this world, and that's what they do, so that's fine with us.
Our contract ends with this album we will see with them about any prolongation.

LS: I see you guys will be playing Festival des arts bourrins this year in
August.  Has Moonreich played many live shows in the past
and if so, how has that gone over for you? Was the crowd taken by your
music?

Weddir: Yeah, this festival is the only one festival we play this summer. That should be
a great one. Yes we played several gigs in France since we
started. We also played in Germany and we should play in Italy soon and make an European tour next year, but nothing confirmed at this point. We really believe in the power of playing our art live, in front of People. Studio is great, but I
think the real meaning of all the energy we have take place in front of people,
it's like «Take it straight in your face». That's really a powerful moment when
we unleash the rage that is in our music and most of times, the crowd is
possessed.

LS: Your new album  "Terribilis Est Locus Iste" has been out now for
just about a month. How are things going with the sales? Do you guys have a big
following in France or anywhere else around the world?

Weddir: Concerning sales, I don't have any idea of what's going on, that's really some
label stuff but I guess it's going fine. Our first album was sold about 1 000
copies I guess.

LS: I noticed on your facebook page that you have
shirts for sale for you new album on your website. http://moonreich.bigcartel.com/
That is some really cool artwork on the front of
that shirt.
Who came up with the artwork for that?

Weddir: Well, the T shirt's artwork is directly made with the album's cover art. I have
made all the artwork and layouts by myself for the album. It is really important
for us that the visual aspect of the album and of the band matches with the
concept and the atmosphere of it.

LS: Your music is great, I have listened to
multiple songs thus far and I think I have a favorite...."...And A Star Fell At
The Fifth Sound " all 9 plus minutes of it.
Do you have a favorite or one that you are most
proud of?

Weddir: I really see that album as a «Unity». For me, every song is a pillar of the
temple that is «Terribilis Est Locus Iste». I like to hear every song of it
without any exception and I like to play anyone of them, but as you can guess,
we can't play all of them in live due to time restriction that you always have
when playing a gig and when you already have 2 albums and 2 Eps.

LS: I know you call yourselves Black Metal and it
surely is black...it has an evil side to it especially in the vocals.
Where does your lyrics come from and who writes the lyrics and music?

Weddir: The whole album is a concept album about the French little city «Rennes le
Chateau» and it's mysteries, there are a lot. I suggest to our listeners to get
the album and to go find things about it, that is a really passionate thing. I
always have been inspired by mysteries and secrets. It seems that in this
village, the hidden secret could proclaim the fall of christianity...
I also compose all the music by myself. Of course
every one put his personal touch ; I Have no problem with it.

LS: 5 years may seem long to some, but for a band it is still fairly new. You
guys are such a solid band and play well together. I am assuming you all have
some musical background? Would we know any of you from any other bands?

Weddir: Personally, Moonreich is my first band. I put all I have in it. This is my main
focus. Since the beginning I keep being guided by the holy flame raging. I'm
always recording some personal demos,  for Moonreich and other things... it's
very inspiring for me. The others members also practice in other bands from
Paris.

LS: To date you have released two EPs and two full lengths. Which one of these
albums would you say was the turning point for the band and would you recommend
new fans checking out your older stuff before listening to your new album?

Weddir: Hard question! I don't see things like this... for me, every release is a stone
to an building in a way. Every release has its proper sound, atmosphere and
concept. We are very proud of every abominations we made. The first releases are
really primitives, it is interesting to hear all our discography following chronological order. You can witness progression, which is normal as we personally evolved as musician. I was 16 years old when we released
the very first EP «Zoon Politikon»

LS: Amduscias from Temple of Baal was featured on the song  "Hidden
Mystical World". How did this come about and do you plan to work with him again
in the future? (Or anyone else for that matter)

Weddir: I heard some solos from Amduscias made in couple of French black metal albums
like «Manifesting the Raging Beast» from Glorior Belli. I believe this album is
truly a masterpiece of darkness and evil. I was really impressed by this solo
and how he sounds with his guitar. We played a gig with Temple of Baal last year
and we kept in touch, I just proposed him to make a solo for our next album, he
was really interested by the idea and said yes. He his a very respectable man
and he is a complete possessed about underground metal! About any future
collaboration, I really can't say cause there are a couple of people we'd like
to work with in the future... we'll see.

LS: You guys have a unique corpse paint style
going on and what looks like something similar to a bandana that you wear over
your mouths...?
What is this for? Any real meaning or
purpose behind it or just trying to be different?

Weddir: In fact, it is not bandanas, it is hospital bandages. Yes of course it has a
special meaning for us. Since the beginning, our lyrics are about the weirdness
of human mind, this is really a good metaphor. It is also a good thing to hide
our faces a little bit more.

LS: Does Moonreich have any specific long term goals? Any certain country you
would like to play that you haven't made it to yet?

Weddir: Our only goal is to keep doing what we believe in. It's the only thing that
matter for us. We don't want to play any specific country, we
want to come where people want us to play. In France, it becomes more
complicated to have live gigs if you are not friend of this and this person and
if you are not a cock-sucker». It's like: «If you guys want to play here, you
have to make my own band play in your city, and oh... I can't pay you...» but it
seems that, we are not concert promoters, only a band.fortunately there are
still some dedicated promoters that keep going the good old way.

LS: Now that your new album is out since April 30th. (2013) have you guys been
working on any new material yet or just focusing on playing live and taking it
easy..?

Weddir: We are currently focusing on the release of the new album an  rehearsing for
live with the new songs. We will start to work on future release only when we
will fill that the tame has come, and when inspiration will come.

LS: Well time is up....please you this opportunity to tell the readers anything
that you feel we might not have spoke about or simply give a bit of words of
wisdom...

Weddir: Thank you guys for reading! Keep spreading chaos upon this world.