Interviewing a band totally new to me is always a challenge,
but as you can see, this German, Black, Viking Power Band made it quite easy..... 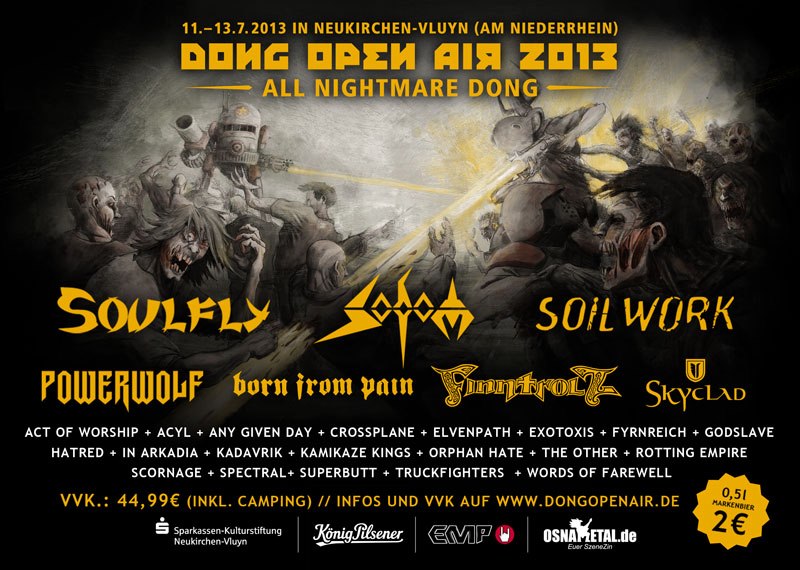 LS: Sorry for the delay in doing this interview.
My notes got a bit mixed up. Hope all is well there in Germany?

S:No Problem. Here is everything nice, except the German weather.
Great Beer, tasty food and a very sexy federal Chancellor..hahaha


LS: Alright, let us start at the beginning. How did the band Spectral come to be?

S:I formed Spectral together with our drummer “Destructor” in the year 1995.
We were young and Metal inspired kids and wanted to create hard, fast and melodic Metal. Our influences in the
past were  Nocturnus , Cannibal Corpse but also Doom bands like My Dying Bride.

LS: Ok, so the band has been together since 1995.
It wasn't until 2001 that you guys released your first full length. Why so long?

S: It was a simple Problem.
We founded our Band , we already had a rehearsal room and even T-shirts with our
Band Logo, but we had no Instruments and were not able to play them.


LS: I understand the whole
thing with production costs.. Spectral recorded your first album on a computer.
How did that pan out for you. Was it worth it in the end?

S: At the beginning we were
happy to have the possibility for a Demo Record.  Now we think the sound is
cruel, however it was the beginning of all…


LS: One of the biggest fears
I would think a band would have is having a member leave the band during the
making of an album, and this is exactly what happened to you guys. Your bass
player left. What did you do? Did another band member take over or did you bring
someone new in? Did this put any delay on this album at all? "Barbaric
Assault"

S: Of course we had a delay,
because our Bass player was the guy who wanted to record “Barbaric Assault” with
his own equipment at his home studio. We tried it…and it failed. We had many
discussions and decided to search a new Bass Player. We found a new and awesome
bass Player who fit perfect in our band and started to record our First Full
Length Record.


LS: Spectral actually played
some live shows without a bass player a few times.
How did this affect your
shows? I mean, the bass isn't always the most prominent instrument in a band but
you can definitely hear when it is NOT there.

S: Yeah it´ s a problem to play without a bass player, but sometimes we had no other choice.
Since the last years , when we started to play with a Keyboard , we had the
possibility to compensate it a little bit. I think it´s not  a lie to say
Spectral Gigs without a Bass Player are still powerful and watchable.


LS: I have to say that you seem to have had a slow start but after 2001
Spectral released a new full length album every 2-3 years.
Each one better then the last I assume? How would you say
(other then the obvious) that the band has grown over the past ...what, 18 years?

S: That’s our opinion too. Every new Record is better and better, however we have many fans of our 2004
Record “Dawn of Gods”, I think it´s a very fast and aggressive Record and it´s a
turning point. Nowadays we have more Thrash influences. 18 years are a very long
time and we never thought that we would get a label and play so many gigs after
our disaster start.


LS: I have been listening to a variety of your music from different stages.
One of the songs I listened to was from your 2007 full length "Stormriders"
The song is really good but the part that stands out to me the most is the drums especially in the
beginning. As a band in general you all seem to be fine musicians. Was there
anything before Spectral that was a learning experience for you guys and what
lessons did you learn that you keep in mind while making music now?

S:I played trumpet in a church choir:-)….We just listened to the music we loved, without playing
instruments before “Spectral”…We had a dream which we wanted to realize and
didn´t stopped to follow it…becoming Rockstars!!!


LS: From 2007 to 2009 when you released " Evil Iron Kingdom"
your sound has an obvious change to it.
This observation leads me to believe that your musical tastes as a band runs far and wide.
Any bands actually influence your sound?

S: After “Stormriders” Thrash Metal became more and more important.
One reason was our  Lead Guitar Player “Aggressor” at this time and the other reason is that we always
try to mix all our influences. No special Bands just all the Stuff we listen to.

LS: 2012 marked yet another change in sound.
Listening to the song " Into Oblivion" off of your 2012 release
"Gateway to Death" I almost hear a power metal sound. Does this constant change
up of sounds make it hard to keep the same fans...I mean maybe someone is into
Viking Metal but not Power Metal.

S: Maybe some “Old” Spectral Fans don´t like our new style and other Guys love it. We can´t make music which
everybody likes. We think that “Gateway to Death” is the best Record in our
history and we try to leave The Viking Area more and more. We just play the
music that comes in our mind.


LS: Lets talk a bit about live shows. How has that been going for you and are there any upcoming shows or
fest Spectral will be playing this summer (2013)

S: In July we play at the DONG OPEN AIR in Germany ,together with Sodom, Soulfly and other great bands.
After this we travel to Spain to play at the COIN ROCK FESTIVAL(Hail David our
Brother of Metal). Smaller Festival gigs are in August  and some gigs in
Belgium and Netherlands are planned in the end of the year.


LS: Seeing there is such a diverse sound you have going on, what kind of fans do you seem to draw in?

S: That doesn´t matter. I think in every age and every kind of music we will find new Fans. Here in our
Town and Area we get more and more young fans, that’s very nice.


LS: To my surprise you have a keyboard player in the band. To be honest, by listening to your music I never
knew until I watched a live video. This adds a whole new twist
on Spectral. What kind of music do you guys play exactly? Haha

S: We just want keys in the background not like Ensiferum or other bands. “Gateway to Death” is the first
Record with Keys on the most Songs.Our Music Style is Black Viking Power,
but It´s difficult to describe nowadays more Black Thrash in the past more Viking Metal.


LS: Nowadays, what is the band doing? Will it be another 2 or 3 years before your next release and will it
once again be a full length.

S:In the next year we want to record our 7th Full Length Album and we started the
Songwriting 6 months ago…We try our best:-)


LS: CCP Records has pretty much put out your last 3 full length albums.
Will you release with them again or change that up as well?

S: Sorry, but we can´t answer this question. Next year we can give you more information.


LS: What are some of Spectral's long term goals...any dreams for the band?

S:A Europe tour would be great.. maybe Ensiferum could support us hahahaha


LS: Well, it is about that time. Thank you once again for your time.
Please use this opportunity to speak your mind, give a shout out or mention something we might not have
covered.

S: first we want to say a big Thank you for this interview and we hope to play some gigs in the
beautiful Norway:-)

Little Story:
In 2011 me and the Keyboarder  travelled together with our girlfriends the SogneFjord where we
wanted to do a boat 9,-trip in the evening, however the engine broke down and we
had to paddle many kilometers in the Dark to our town without any paddle
experiences:-) A funny evening…..Thank you very much.
BANG YOU HEAD
Teutonlord/Spectral

Here is a song that you can listen to.
http://youtu.be/1lVbBoFxzTQ