Studfaust is dirty and out of control Rock&Roll Band from Norway. This is a band that has a lot of energy and just want to have fun! Find out what there is to know about them along with me as I talk with Tore Bratseth. 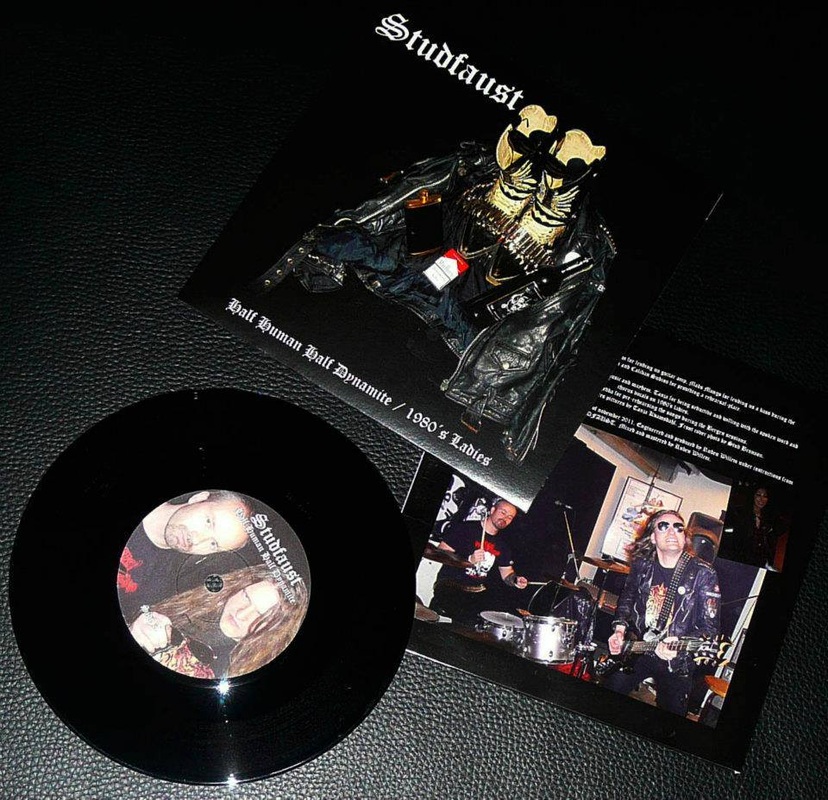 LS: Thanks for taking the time out of your busy day to sit down and do this
interview with Lilith Scare Webzine.

Tore:Allright. No problem. Thanx for YOUR time and interest in the band. We
aim to please ! He he :-)

LS: I got an invite just today to check out Studfaust.
By the looks of things, this is a new band, or you just started a Facebook
page?

Tore: Alright. No Studfaust is indeed a band. It started with just me and
Bård Faust back in November 2011 when we started rehearsing some tracks. Since
we were only 2 people, we have not played any gigs until just recently when we
completed the line up with Pete Evil on bass. And yeah ! We are open to more gig
bookings alright !

LS: This is one of those bands that have a mix of very well known
musicians.
I have to ask....do you feel this is some kind of leverage for your music
seeing as how people normally flock to bands that have members from some of
their favorite bands such as Emperor, Old Funeral and Blood Tsunami?

Tore: Alright. I get your point, but bottom line is that  we love the
music we play, otherwise we'd rather just go to the pub and sit there instead.
And with Studfaust we get an outlet musically, because we're not stuck in any
formula except rock n roll which is a wide term , but is rich in spirit.
.

LS: You guys are a 3 piece band and play "Dirty" rock & Roll!
Is this the style of music you all like and have just played in other bands
for the sake of being in a band or do your range of musical tastes go far and
wide?

LS: In 2012 Studfaust released a single "Half human, Half Dynamite /1980's
ladies"
Great titles....what is up with the title? Does your music take influence
from 80's heavy metal?

Tore: Alright. Our music takes influences from the genuine core and spirit
of rock n fucking roll ! No stupid hypes or trends. 80's heavy metal is just one
of them. You will also find touches of early punk, black metal, thrash, and rock
n roll. The first song of the single, "Half Human, Half Dynamite" is about giving
it all to rock n roll in the right way. And to be that you have to have a mind
set on it. The "1980's ladies" song is a tribute and salute to the sexy females
of the 80's who liked bands like Twisted Sister, Wasp, Motley Crue, Judas
Priest, Motörhead and so on, and dressed in true 80 style and liked to party
along to hard rock music. I miss that. Today it's all botox , shopping,
desperate housewives TV, depression and lifestyle magazines !. Fucking soulless
and boring. We salute the women with an 80's attitude, alright !

Tore: Alright. Ha ha, Yeah I might take that up. It's a good idea that
should remain disclosed until it eventually happens.

LS: Your single was released on Soulseller Records. Is this a label that
you plan on sticking with for a while, and how did you get a label to sign
you for a single? Don't they normally look for more?

Tore: Alright. I see no reason to leave them if they still wanna keep us.
Jorn is a very reliable guy and is good on communication. He wanted to sign us
12 seconds into the first song he said. Yeah, they normally look for more, but
he liked it so much he wanted to release it. He will be the first one we will
look to when we are ready for LP release, and see what he can offer. Good man he
is.

LS: I see Studfaust has played live shows. I see this band in a
small bar type setting. Close Encounters of the Rock & Roll Kind. You know,
up close, rowdy and personal!

Tore: That's the way we like it baby, we don't wanna live forever ! I love
sweaty bars/clubs. You get more in contact with the audience which is good. I
have played gigs with my other bands up to 3000 people which is also great you
know, but my personal preference is 200-400 capacity clubs where you can
actually toast with the front row and shake their hands and put my snakeskin
boots on their shoulders , alright !

LS: Like I mentioned earlier, you have some well known people involved in
this band. Is it something serious or more of a side project for you all?

Tore: Alright. We will take it as far as it goes. As long as it's fun, we
will do it. And that should be the main reason for any bands out there really.
It's not any more complicated than that.

LS: You're all from Norway, Although people see Norway as the country of
Black Metal, Sheep and Sweaters....I think your music style will be pulled off
nicely there. Have a nice little following yet?

Tore: Alright. It seems like it has been a bit of underground buzz about
us, and I think there are more than enough space for a band like us here in
Norway. Not many bands play as freely as us, and we have nobody who bosses us
around to tell us what to do. That is great ! We can do what we want, and that
suits us just fine. Rock n roll for rock n roll's sake, only !

LS: What about the band name....It is something of a mix between you and
Bård? What about "Pete Evil"??Did he come in after the band was formed?

Tore: Alright. He he. Yeah in The Batallion my name is Stud Bronson, and Bård used
Faust with some of his bands you know, so that came natural and it sounded nasty
like the music we play. Pete Evil came in later. Ha ha, What would that be ? :
StuPiteFaust ?? ha ha ha ! We stuck with the name, but Pete is just as an equal
member as Bård and me indeed ! And he is EVIL alright !

LS: What is Studfaust's motto? The people who listen to your music or watch
a live show should take what away with them?

LS: What is going on these days? Are you guys working on any new material?

Any shows coming up that you want to tell us about?

Tore: Alright. Yeah, we have 8 tracks written for the upcoming album. We
need 2 -or 3 more (that are being written now as we speak ) for a full LP. We
have more shows in the works yes, but no written deal is done yet. Just verbal
agreements on dates, venues, so I cannot confirm them for you yet.

LS: Are there any long term goals for Studfaust? I mean I guess depending
on if this band is something serious to you guys or just for fun would determine
what the future holds for the band.

Tore: Alright: The goal is just to continue to play. I don't really care if
we remain an underground band or should make it slightly bigger, as long as we
get to play the music we like. Our first goal is to get the LP recorded and book
gigs more frequently after that when we have the release date.

LS: Why not take a minute to tell me and the readers how this band came to
be....a night of heavy drinking or .....?

Tore: Alright. The first sessions were actually done in Bergen with
Armagedda ( ex Immortal, I ) and myself. Then I moved to Oslo, and I met Bård on
Elm Street Rock Cafe after a night of drinking (!!) How did you know?? He he. I
told him I had 2 tracks that I wanted to record and he wanted to participate on
drums. We have known each other since 1989 actually. He was the first one ever
to buy the first Old Funeral demo back in the day.

LS: What about merch? I think shirts would go pretty fast. I can tell (like
I said before that people are just going to flock to you guys like flies on
shit) (Not that your music is shit) haha

Tore: Alright. Well sometime that shit hits the fan you know ! ha ha ha! We
will make some shirts indeed, and they will be ultra bad ass ! He he.

LS: Your single was release on vinyl....way to stick to the old ways hu?
Was it released on any other format or any plans to release on cd or maybe even
tape?

Tore: Alright. I have always been a vinyl collector since 1984. So for me
it was not the old ways. It was the only way. I was not one of those who sold
all my vinyl when Cd came along. I continued to buy LP's. In all the bands I
have been in I have always insisted to the record company that it will be
available in vinyl format. I don't think that single will be re-released, If it
will, it will be as a vinyl picture disc in very limited edition. When the LP
comes it will most probably be CD and vinyl.

Tore: Alright. That is not one thing, That's 2 things. 2 boots , 1 boot.
Get your grammar right, girl !! Ha ha !
Cowboy boots are great. Mine are with genuine snake skin.
I always like the wild west, and often thought I was born
110 years too late. I 'd like to rob banks with Jesse James and the likes. Today
the banks don't even have cash in them anymore. You can just apply for loans and
shit there. Booooring ! Banks should have had lots of cash we could rob :-)
Cowboys = old school outlaw, alright !

LS: There are only a couple live shots of Studfaust up on your
Facebook page. I can totally see (without seeing ) the crowd loves you guys and
you love what you are doing....You are meant to be on stage.....

Tore: Alright ! Yes, stage is were we feel most comfortable and in the
right place. If we didn't love what we were doing what is the fucking point. ??


LS: Not sure how old you are or how long you have been playing in bands for
but at what point in your life did you know it was your calling?

Tore: Alright .I am 40 years old alright ! OLDRIGHT !  I have been a
fan of rock music as long as I can remember. My father is also a big rock fan,
even to this day. He has a huge record collection, and I learned it all from
there as a kid.
My first true rock n roll love was Sex Pistols and Motörhead,
and from there it evolved to Twisted Sister, Bathory, Venom, Black Sabbath,
Kiss, Sodom, Celtic Frost , etc.. You know the classic bands. More than anything
I am a fan of rock that just happens to play in some bands really.

LS: Well, this was probably one of the more difficult interviews to do and
I honestly can't see dragging it out with pointless questions, so please use
this time to say whatever it is you feel all the fans should know, or whatever
else you want to say......

Tore: Alright. The handfull of fans we have out there should know that rock
n roll ain't dead. I can tell you that much.
May Lemmy be with you !