Back in 2008 on myspace I was doing interviews for fun.
I contacted bands and asked if they would do an interview with me so I can post it on my myspace page.
Walknut was one of the bands I contacted and to my surprise they agreed.
To this day I still don't know which member it was who did the interview and from what "He" said, it doesn't really matter. 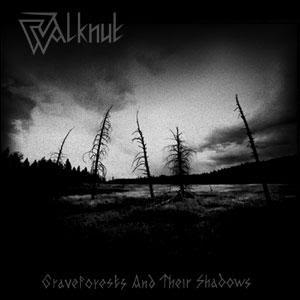 V: Sometimes when doing an interview with a band with more then one member you
don't always know who you are talking to, who is this and what do you do in the
band?

W: It doesn't matter who I am and what I do in the band. It's not an
interview with me as a person, it's an interview for WALKNUT project, which is the only thing which really
matters here.

V:The name Walknut is quite unusual. What is the meaning behind it (For those who don't know)?


W: "Walknut" or "Valknut" is the entwined triskel (or three interlocked
triangles), also known as "Knot of the Dead". Walknut relates to the cosmic symbology of Wotan / Odin / Udin,
the Father of the Fallen.
It also represents the 3 worlds of heathen cosmogony, as well as 3 Nornirs,
the weavers of fate and the concept of Wyrd itself.

V: I personally have never seen an interview with Walknut  before. Has there ever
been one and if not why?

W: So far we did only 1 interview in some paper magazine before the current
one. I don't really like answering interviews, and usually refuse such prepositions, so there are not
many.

V:You are from Russia, how is the scene there and how well are you
accepted??

W: Russia is (or was) the homeland of the few finest and very unique Black
Metal bands such as f. ex. BRANIKALD, RAVENDARK and FOREST. Yet, them and a few others incl. us
always kept it to themselves (ourselves)...
If you're new to Russian Black and Pagan Metal try the three above mentioned
bands, actually the whole of Blaze Birthhall circle incl. NITBERG and VARGLEIDE, then TEMNOZOR, OLD
WAINDS, NAV' and MOR. Actually, whatever was released on Stellar Winter / Hexenhammer Records and Assault
Records might appear more or less interesting in my opinion.
However, just like anywhere else, the most of "black / pagan" metal "scene"
in Russia is only about playing shitty music, going on parties, spreading rumors and groundless
boasting. We do not consider ourselves being a part of it and we do not care neither of what happens there
nor if they would like to accept us well or not. As far as I can judge by some publications and
reviews I've seen, our debut album was quite well received, not that it is really important to us.

V:Walknut has been around since 2006. For some reason I thought it was
longer. How did Walknut come about and who started it?

W: WALKNUT consists of two people: Stringsskald and Ravnaskrik.
We knew each other for many years already and have been collaborating with each other on some other rather well
known projects and bands since ages. WALKNUT was born back in 2005 or so as a personal project
of Stringsskald and it still stands more or less the same, except for Ravnaskrik has joined him
later on to assist in the certain aspects.

V:Your music is based on Nature,Pagan Mysticism,and Heritage. What kind of
research or study did you do on these things to base your music on it?

W: When I was younger I was studying a lot of books and publications on
religion and spirituality, politics and history, (para)science and mythology, psychology and occultism,
philosophy and anthropology, archeology, folklore and culture. I used to study history in university too.
At the moment everything I may need lies inside of me and in land I live on. We base our music on our
understanding of cosmos, spirituality, tradition, history and folklore. Long forest journeys are
important part of our pre-creative experiences too.

V:Your myspace page is very vague. I know you have out your one C.D.
entitled, " Graveforests and Their Shadows" that was released in 2007. What kind of response did you get from your fans
and did you guys live up to the expectations?

W: "Graveforests..." is our debut and the only album so far. Judging from
what I see and know, the response among audithory was excellent. Originally we've recorded this album mainly
for ourselves as a kind of musical and mystic experience and firstly we had doubts if we should release
it on CD at all. So I can say the response greatly surpassed our expectations. So far, Stellar Winter has
spread 2 000 copies of our album (during circa 1 year) and there is quite a large demand for more, which
we already can't satisfy with the remains of our old stock. Thus, all in all we may say it was
received more than just well.

V:I can be honest and say that I am a little confused about the status of
Walknut. On your myspace page it says that you are unsigned, yet searching the web I found somewhere
that says you are signed by Stellar Winter Records. Can you clear this up for me please?

W: We've self released our debut CD through Stellar Winter, because it was the
less complicated and most natural things to do. The same time we have no contract obligations, so
we're not really "signed" to a label. Candlelight Records tried to sign us this Summer, but right
before sending the contract they backed off because some of their German leftwing associates threatened
them with the boycott due to the recent release of BURZUM "Anthology" CD, so Candlelight owner
became afraid that by signing WALKNUT they may get involved into similar problems, thus they had
to cancel the contract. It's fine for us too, I guess, we do not really fit mainstream labels'
roasters.

V:You have on your myspace page only one song "Motherland Ostenvegr. Why do
you have just the one song up?

W: Never thought it's really important how many songs this or that band may
have on myspace profile. I guess, those who truly like our music and attitude could always find a CD in
some distro or, at least, download the full album in mp3 through some torrent, the rest are obviously
not interested enough, so they don't really need our efforts.

V:Going back to a previous question in regards to your C.D., is this C.D.
still available and where can we get one?


W: At the moment our debut CD might be still available on a few distros like
The End (USA), Morbid Winter (Canada), Supernal (UK) et c. We plan to reprint it soon as the demand
is really huge, so, I guess, it won't be a problem to buy "Graveforests and their Shadows" later
on as well.

V:What are your views of the black metal scene these days and were you always
into black metal?


W: I am not too interested in nowadays black metal scene, because the most of
the bands do not have the spirit, even if so many of them try to mindlessly mimic the legendary hordes from 90's.
They obviously fail, because they all lack something important the old bands
had. As for ourselves, we still mostly listen to Black Metal of 90's, naturally,
because this is the music of our youth. Mainly old Norse, old Polish and old Swedish scenes. Our main
favorites include: BURZUM, STRID, old GRAVELAND, ILDJARN, DARKTHRONE, GORGOROTH, ENSLAVED, old
SATYRICON, old EMPREROR, HADES, TAAKE, MANES, MOCK, FORGOTTEN WOODS, TRELLDOM, ULVER, IN THE WOODS, IMMORTAL, INFERNUM, FULLMOON, MYSTERIES (POL) and of course, the true legends of old Russian Black metal scene: BRANIKALD, FOREST and RAVENDARK. This list may go for too long, especially when it comes to the Norse Black Metal scene of 90's. When it comes to the modern scene, we sometimes listen to
PRIMORDIAL, AGALLOCH, NOKTURNAL MORTUM, HIMINBJORG, NEGURA BUNGET and quite enough of non-metal stuff: dark psychedelic / indy rock music, folk and classics.

V:I have heard from different people that Walknut is considered an NSBM
band.
Is there any truth to this and do you have any response to the
accusations?


W: WALKNUT is a project which performs atmospheric black metal influenced by
northern nature and mystics. Plain and simple as it is. "Different people" may say whatever they
want and consider WALKNUT to be whatever they would like the most, as well as they may like
WALKNUT or hate WALKNUT, I don't care at all.

V:You are influenced by many bands. One mainly that I hear is Burzum. Do you
have an opinion on Varg, what he did, who he has become?


W: We were heavily influenced by early Scandinavian and Polish scenes back in
our youth and in some certain understanding it burns inside of us forever. As the years went by, we
obviously grew up and matured to be self sufficient both music-wise and lyric-wise, so no exact band
directly influences our music, nor we're looking to copy anyone. Our music rather naturally stems from the distant voices
of blood and soil we hear inside ourselves, from the ghastly visions of these
landscapes, from our lives, our travels and our experiences, nowadays this is what comes
rather from inside of us, than from outside.
As for Varg, he is a fine man. I used to correspond with him a bit before he
cut the contacts with everyone not too long ago. He is an in depth person and definitely  worth more
respect that the most of the nowadays Black Metal "icons".

V:What lies ahead for Walknut, any plans of another cd maybe?

W: Yes, certainly, the concept of the new album already grows in our minds.
Don't expect any style changes. So far, the project name of the new album is "The Knot of the Dead".
We hope to finish the new record somewhere during the coming Winter of 2008/2009 or so, but
it's too early to provide the exact terms. Who knows, maybe tomorrow will silence us forever? Time will
tell.

V:I thank you for your time. I hope to see Walknut do more and would love to
hear any final words you might have at this time.