I had the chance to the very interesting one man Black Metal/ Ambient band Darkened Winter.
This interview was conducted over a few days via instant message. 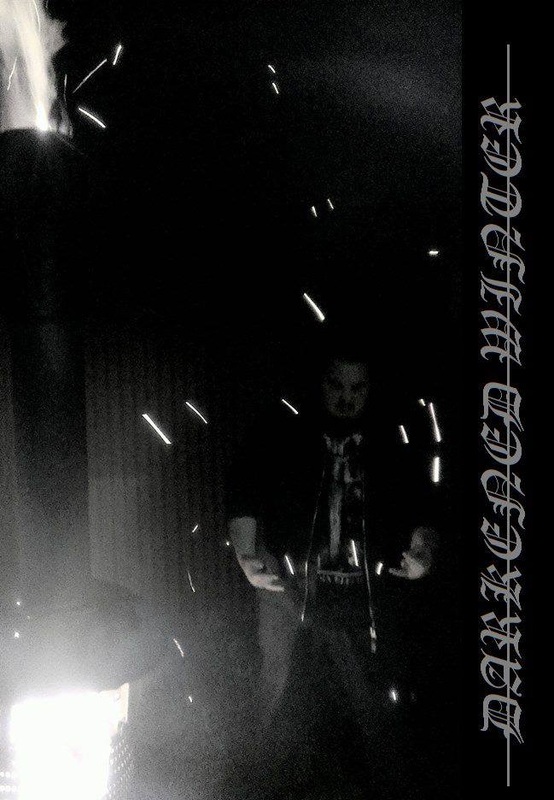 LS: Good day. Thank you for taking some time out of your day to do this interview
with Lilith Scare. All is well in your world these day?

Winterdemon: Hi, I'm going ok thanks & Thank you for taking the time to do this
interview, I've been quite busy to be honest, I've been working on
marketing Darkened Winter and the new album "Yggdrasil" to a wider audience and
I also finished writing the music side of things for a 5th Release entitled
"Tumulus", which I'm hoping to have ready for release by sometime next year.

LS: That is good to hear.... So Darkened Winter came about around 2006-2007.
Your a one man deal.
At one point you attempted to get a full band together
with no luck and decided to do it on your own.
Is the metal scene that bad in South Australia that you couldn't find a full band?

Winterdemon: Yes that's right, i looked for about 2 years with no luck.. so i decided i
wasn't going to wait any longer and did it myself.
As for the metal scene here, i wouldn't say its really bad, just that black metal is a very
underground genre here. Also living in the smallest city in Australia makes it
all that harder to find other like minded musicians, that want to play
BM.
But after doing this now for the last 7 years, it would be hard to
fit Darkened Winter into a band atmosphere now.. its become a very personal
project for me.

LS: Well of course, this is who and what Darkened winter is now...
So, you play Ambient black metal. There is always a big debate as to what exactly Ambient
Black Metal is. What is it to you?

Winterdemon: Well some of my tracks consist of purely ambient instrumental tracks, But i
also i like to create an ambiance / atmospheric feel with sounds / strings etc.
To me, it gives the track more depth and feeling.

LS: So, you are saying it is more of a feeling verses an actual genre...?
Sounds about right to me. haha
So, you recently opened an online store. Has this helped with sales of your merch and has it helped at all with the promotion process of Darkened Winter?

Winterdemon: I suppose it could be a genre haha.. But to me i always thought of it more as
creating atmosphere within the track.
Yes! its something i've wanted to
do for a while, and finally did this year. i launched the store in order to
further promote and distribute Darkened Winter in a more professional way,
opposed to the old way of making up home pressed copies of albums / online
download releases. It has been a slow start, but with more promotion
i'm hoping i maybe able to get other distributors / labels on board and run the
Winterrealm page as a small label / distribution page for other bands also.

LS: We all have to start somewhere and you are on the right track for sure. :)
Lets talk a minute about the band name. Darkened Winter.
This to me can be taken in 2 ways. One being that you like winter and the darkness it
brings, the cold the atmosphere in the air I guess you can say....OR you had
some dark times in life which happened to take place during winter. I could be
wrong, but what was the reasoning behind the band name?

Winterdemon: That is very true!
Wow you hit it right on the spot, that's exactly
why I chose the band name. It can be taken as the darkness, isolation
that winter brings.. but the true purpose of the name is of personal
significance to me, I was in a dark time and I formed Darkened Winter in the
winter of 2006.

LS: Ha! Well I guess I spoiled that answer a bit for you then. haha
To date, You have released 4 albums from 2009-2013. Which of these albums would you say
was the turning point for Darkened Winter?

Winterdemon: That's ok!
Yeah I would have to say the turning point, where I
started to find which direction I wanted to take and my sound. Would of been
with my second album "Raiders of Northland".
Although I am happy with what I have released so far, my latest album would definitely be the most
challenging album. Due to a lot of different sections and instruments, writing
lyrics to fit the concept of the album, etc. it took me about two and a half
years to complete, but its an album I'm quite proud of.

LS: Good album indeed and good place for it to mark the maturity and growth.
How about we talk about your lyrics....They seem to come from a few different
things like Nature (obviously) maybe some Norse mythology... A lot of people
doing music such as you reflect off of nature. What in nature is your biggest
influence and please don't say the snow. haha

Winterdemon: Thanks, My lyrics do come from nature, the pagan perspective. I do like the
forests / the mountains / the snow! haha, I just find it all really
inspirational. I think we can learn a lot about our past, present & future
through it, we just have to look.
There's definitely Norse pagan / mythology influence, that shows especially in the latest album, As the concept
is based around the Norse belief of the world tree "Yggdrasil" & the nine worlds connected to it.

LS: It is all very obvious in your music that you sing about that stuff so I guess
you are achieving what you planned?
And these days you are working on your fifth album.
How, if at all will this new album be different from past
releases and is there any info you can give us at this time? Album name,
possible release date?

Winterdemon: Yeah definitely, it is something I feel a strong connection with.
The fifth album also has a story behind it.. its going to be based on the up
bringing of a Viking warrior, his life, going away to fight, then his death
following the spiritual journey, then the physical death and burial on
earth.
It will be entitled "Tumulus" (which is the name for a Viking
burial mound) I am hoping to have it ready for release by next year 2014.

LS: Have you done a lot of research regarding Vikings and their life and all that?
Was it something you just started to look into for the sake of the music or was
it something that has been interesting to you long before?

Winterdemon: I have done a lot of reading regarding it, but Its something that's interested
me for a long time. As well My family heritage go's back to parts of Scandinavia
so the history has always intrigued me.

Winterdemon: Its is definitely.
Yes I've always liked medieval folk / ambient music
and in 2010 I started another solo project called "Northwind" to write that
style, I've currently released one album and have done a split album release with
another artist "Altarium".
I also write the music in another project "Awoken By Death" which is more death metal based.
I have a lot of different influences and like a lot of different genres, so having these 2
projects allows me to write different styles and put that creativity into them,
rather than Darkened Winter.

LS: But Darkened Winter is your main project then?
And what about playing live?
I mean I know you don't because it is just you but have you ever thought of
getting a session band together for some live shows?

Winterdemon: It is my main project yes, but I also write music for the other projects when I
can.
Playing live is something I have thought about, I would have to
find session musicians like you said if I were to do it. but right now I am
happy writing music and releasing albums, but we will see what happens in the
future.

LS: Well, you have been doing it this way for this long so guess there is no rush,
hu?
Since you do all this on your own, I guess since you use a drum machine
that you are not a drummer..
Maybe someday you would like to learn? I know
that a lot of people put down drum machines.
What do you think about that?
You know, people saying that drum machines suck, or
that they are too obvious, too fast, too loud ect.

Winterdemon: Yeah I'm not in any rush to play live really, been a solo musician does have
its downside in the ways of spreading your music via live shows, but the
benefits of been a solo musician is the creative freedom and there's no
timelines, rush or time restrictions. I think if that changed, it would go from
something I enjoy to something forced and I don't want that.
I actually do play drums as well, I Just don't have a kit. So using the realistic drum
programs are a way around that problem. I've got nothing against artists using
drum programs, and I don't just say that because I do.. I've heard some really
good music from bands such as - "Aberration Nexus, Fallen Calamity" which also
use this technique and with the technology these days you can mix them really
well. But that said you are always going to get people that will pick at it if
you use drum programs, I guess you cant please everyone haha

LS: You can not please everyone is right....haha
So, other then working on your new album, what else is going on these days?
And just for fun...if you could have a guest appearance on your new album
doing vocals, drums guitar or bass...who would it be and why?

Winterdemon: Not a lot really.. just the normal day to day life. Music is my passion so
a lot of my time go's into doing that when I'm not doing other things.. I've got
good stuff happening with my other project also, I'll be working on a split
release soon for Northwind with a band from Germany. so it all keeps me pretty
busy!
Guest appearance.. maybe Frost ( Satyricon ) on drums, He's an
amazing drummer and I could do an album without using a drum machine haha

LS: haha Yeah, well you never know. Maybe one day.
So, what are your long term goals for your music?
Say 5 or 10 years down the road?

LS: Sounds like a realistic plan. Well, unless there is something you feel we didn't
talk about you can use this time to say anything you like before we go...

Winterdemon: Id like to say a big thanks to you for taking the time to do this interview
& to everyone that has supported Darkened Winter, Hailz!

You can hear a song here.
http://www.reverbnation.com/darkenedwinter01